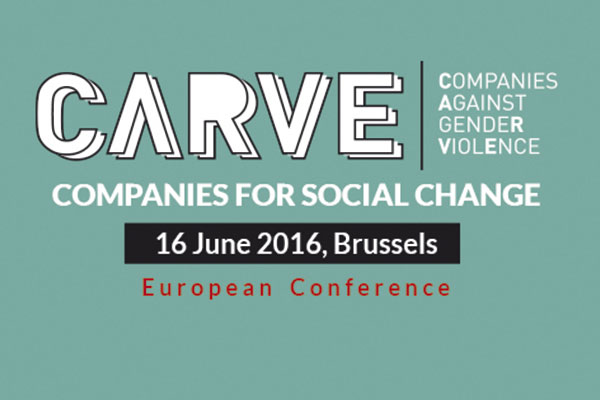 Upcoming release of the CARVE guide for companies!

We, the partners of the CARVE project, are proud to announce that the “European guide of best practices: companies fighting gender-based violence” will be presented in Brussels on 16 June 2016!

The guide is thought and designed as a practical tool for companies to address the issue of gender violence at work but also happening outside the workplace. It will include the Belgian, Bulgarian, French, Greek and Spanish legislations regarding the involvement of companies in the fight against gender violence, demonstrate why it is necessary for companies to commit to its elimination, and show how to do it. Examples of companies, public administration, State and NGO’s good practices will finally illustrate the guide.

Indeed, we found out that despite the significant consequences of domestic violence on the professional life of victims and offenders, companies lack resources to deal with this issue. It is however particularly relevant for companies to commit to the elimination of gender violence: due to the prevalence of gender violence (one woman out of three will experience physical and/or sexual violence from the age of fifteen in Europe) companies are highly likely to employ at least an offender or a victim. Moreover, gender violence negatively affects the professional life, productivity and safety at the workplace of women in situation of violence, and of co-workers (source 1). It is also one of the only place and best places where women in a situation of gender-based violence can see their situation detected, and find information and assistance. It is therefore necessary for companies to be provided with accurate information to get a better comprehension of the issue, as well as with tools to manage it.

The CARVE project is another step in the global movement toward eliminating gender-based violence. We believe that involving companies in this fight will contribute to raise awareness on this issue and will provide women who are/have been in a situation of gender-based violence with more solutions and support to recover. Altogether with our eight partners representing five European countries, we conducted national researched, interviewed people from the private, public and third sector, and organised seminars opened to the civil society. Our ambition is to foster the involvement of companies in the fight against gender-based violence, by providing them with tools to deal with such a devastating issue. This two years project is co-financed by the ‘DG Justice: Daphne Programme’ of the European Commission.

The national seminars have been led in Belgium, Bulgaria, France, Greece and Spain between September 2015 and April 2016.

These events served to present the outcomes of the national reports and to open a public debate. The outputs of both national reports and workshops are currently used to draft a European Best Practice Guide for companies and politicians to achieve a better vision of the European situation regarding domestic violence in Europe, and the best ways to assist victims. It will be released during the European conference “Companies for Social Change: Stopping Gender-Based Violence” in Brussels on 16th of June 2016.