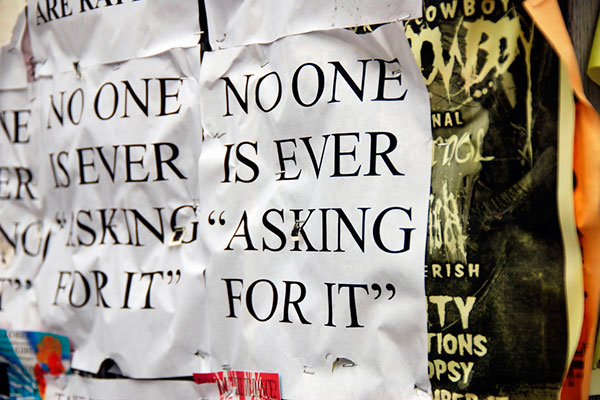 It is more than time to tackle gender violence!

The months of May and June 2016 have been marked by the unusual presence of gender violence issues in the media. Indeed, the recent accusations of sexual harassment against the now ex Vice-President of the French National Assembly revealed the extent of normalized sexism in French politics (source 1). However, the very fact that four women had the courage to publicly denounce this behavior shows that sexual harassment happening at the workplace is every time less accepted by the society.

When I first drafted this newsletter, I was optimistic enough to broaden this observation to gender violence in general. The case Amber Heard vs Johnny Depp proved me wrong. Since the actress obtained a domestic violence restraining order against the actor, a disturbing series of articles and declarations insisted in questioning her word and her credibility. “But the reaction to Heard’s allegations – true or not – shines a light on the three most common responses to a woman making claims of domestic abuse: outright disbelief; the blaming of the woman herself, by accusing her of provoking an attack or not behaving like a ‘perfect victim’; or the suggestion that the story must be false because the alleged perpetrator is such a ‘good guy’.” (source 2). Women in a situation of abuse are blamed when they stay silent and blamed when they decide to speak out. It is more than time to address and tackle this unacceptable situation.

Companies are a relevant place to do so. First of all, they are far from being immune: sexism and violence against women exists in many workplaces, and gender violence committed outside the workplace has an impact on the workplace (source 3). In Europe, 22% of women have experienced at least one episode of physical and/or sexual violence by a partner since the age of fifteen, and “43% of women have experiences forms of psychological violence by a partner, which includes other forms of abuse alongside psychologically abusing behaviours” (source 4). It is therefore difficult to doubt that most companies are employing at least one woman in a situation of gender violence as well as an offender. Contrary to the common idea that such violence only happens behind closed doors and displays no effects outside home, it can result in a reduction of the productivity of the employee, an increased absenteeism and an increased risk for the safety of employees and consumers (source 5). Research suggests that victims are also abused and threatened by their partner/ex-partner when at the workplace (source 6).
Secondly, the workplace appears as the best (if not the only) place where their situation can be detected, and where they can find information and seek assistance.

It is therefore necessary for companies to be provided with accurate information to get a better comprehension of the issue, as well as with tools to manage it.

The CARVE project’s main goal is precisely to provide companies with tools to understand and address the issue of gender violence. We believe that involving companies in this fight will contribute to raise awareness on this issue and will provide women who are/have been in a situation of gender-based violence with more solutions and support to recover. Altogether with our eight partners representing five European countries, we conducted national researched, interviewed people from the private, public and third sector, and organised seminars opened to the civil society. This two years project is co-financed by the ‘DG Justice: Daphne Programme’ of the European Commission. Using the knowledge we gathered during the first steps of the project, we designed a “European guide of best practices: companies fighting gender-based violence” for companies that has been released during the European Conference “Companies for Social Change: Stopping Gender-Based Violence” in Brussels on 16th of June 2016. This successful conference has gathered personalities from all over Europe as well as representatives from companies, NGOs, trade unions and EU institutions who exchanged facts and figures as well as experiences on gender violence and workplaces in Europe.
Local events with presentations of the guide in each country and language will take place between June and September 2016.