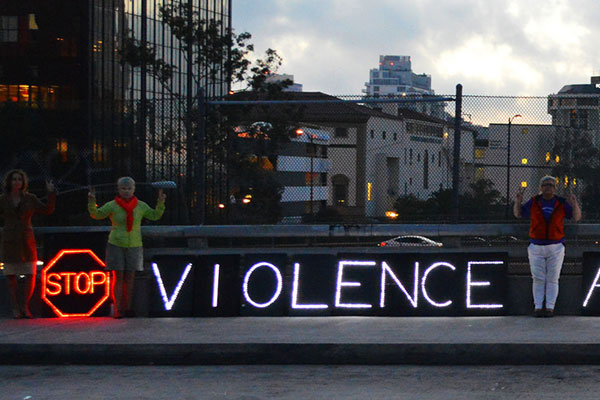 «No industry or country can reach its full potential until women reach their full potential” Sheryl Sandberg, Chief Operating Officer of Facebook and founder of LeanIn.Org, said (source 1). Indeed, gender equality is not an issue to be solved by political leaders only. It will become a reality thanks to everyone’s actions: States, NGOs, companies, people. We are all choosing, everyday, to favour or not gender equality.

For women to be empowered and gender equality to be achieved, it is however necessary to eliminate one of the roots and expression of this inequality: gender violence. Where women are being abused for being women, equality cannot exist. As such, the fight against gender violence is an issue concerning the society as a whole, including companies.

The CARVE project (Companies Against Gender Violence) aims at involving companies in the elimination of gender violence by raising awareness on this issue and providing companies with tools to address it. We already investigated the issue in five European countries (Belgium, Bulgaria, France, Greece and Spain) and interviewed many stakeholders. The outcomes of our investigation are being used to elaborate a guide for companies to address gender violence happening outside the workplace.

It is now time to raise a debate on this critical issue, at the European level. To do so, we are organising the international conference “Companies for Social Chance: Stopping Gender-Based Violence” that will take place in Brussels on 16 June 2016.

It will gather personalities from all over Europe and representing companies, NGOs, trade-unions and the EU institutions, to take part in the conversation. Among them: the Belgian NGO Garance, the European Women’s Lobby, as well as the company Kering.

This conference will be a unique opportunity to share facts and figures on gender violence in Europe and its impact on workplaces, as well as examples of good and innovative practices describe in the guide we are editing. It will finally be a perfect occasion to share experiences, debate and network.

Be part of it: register here!

The CARVE project, started in December 2014 and co-financed by the ‘DG Justice: Daphne Programme’ of the European Commission, aims at raising awareness on the issue of gender violence happening outside the workplace and on the necessity for companies to commit to its elimination. To do so, we conducted research in Belgium, Bulgaria, France, Greece and Spain, we produced five national reports summarising our investigations and interviews with companies, NGOs, public administrations and representatives of the State, and organised seminars to start a conversation on the issue. All this work helped us identify the main needs of companies and of women in a situation of gender violence. The guide we are finalising summarises all this research and aims to be a concrete tool for companies to understand better this issue and address it.