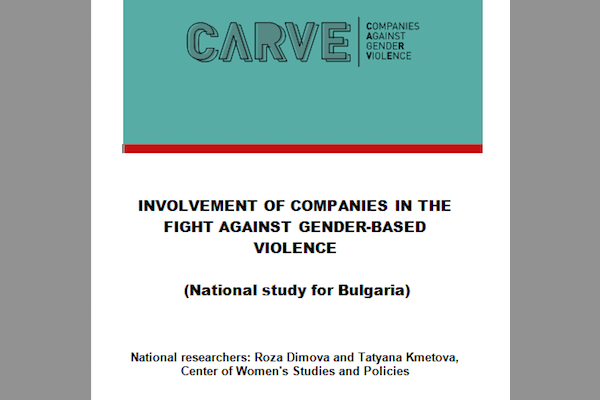 INVOLVEMENT OF COMPANIES IN THE FIGHT AGAINST GENDER-BASED VIOLENCE

The CARVE project is very innovative as a perspective for discussions on the ways and approaches for involvement of business in Bulgaria in the fight against gender-based violence.

The process of selection and involvement of companies in the national Interview Program in Bulgaria and the interviews themselves, held in the period February-May 2015, showed that the topic of involvement of companies in fight against gender – based violence, outside the workplace is still a new one for the country. Gender-based violence is still broadly considered to be a private problem or a problem of the families, not a problem of the whole society. Therefore, the workplace is rarely considered to be the right place, where the problematic should be discussed openly, even though most often, when cases of gender-based violence were detected, the workplace was the only place, where victims could receive any support and help.

National and international awareness raising campaigns on prevention of gender-based violence are not well-known to the business sector in the country and the topic is not recognised as an issue, part of the corporate social responsibility. The social audits also do not cover the subject.

However, cases of violence against women were detected directly or indirectly in many of the interviewed companies (especially in the small-sized ones, which are predominant in Bulgaria), and they were fully involved in assisting and protecting their women employees.

Companies still need to learn how they can be useful and helpful in such situations, especially in towns, where there are no NGOs, working on VAW or shelters/crisis centers for victims of VAW nearby and professional help is not available, which is the most typical situation all over the country. Most of the interviewed companies expressed a need of help from psychologists, lawyers and NGOs, working on prevention, protection and resocialization of victims and perpetrators.