The Catalan Institute for Women campaign promotes, as part of the International Women’s Day 2015, reflections and reviews for citizens about the concept of gender equality, whether in the professional as in personal and family relationships.

The campaign, which is represented graphically with a chess piece on a board, will be widely disseminated by the institutions through their own media, but also distributed through a network of companies who support anti-gender violence actions. 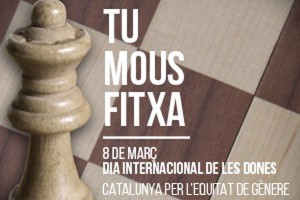